"To the VA and to all veterans ... I have much respect and much love for you," Favre said after giving a shout out to a fan from Milwaukee.

More than 650 wheelchair athletes, who are military veterans from the U.S., Great Britain and Puerto Rico, are competing in 19 athletic events, including basketball, softball, swimming, cycling, lifting and trap shooting.

The goal of the games is to increase the independence, activity and quality of life for veterans through wheelchair sports. The event is presented by the Department of Veterans Affairs and the Paralyzed Veterans of America (PVA).

"It's been a humbling and rewarding experience," Favre said. "It's hard to put into words what you're seeing and what these veterans have achieved and overcome."

Favre, 48, who played 16 years for the Packers and won three NFL MVPs, was enshrined in the Pro Football Hall of Fame in 2016.

Pink Out The Park 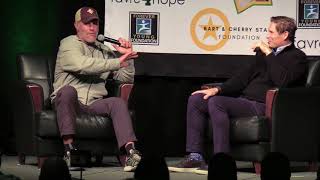 Brett Favre back in Green Bay for 'Chalk Talk' 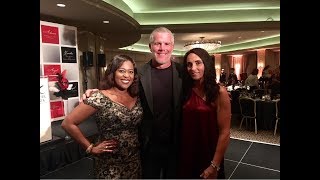 Brett Favre & Deanna Favre on "Sharing the Sugar with Sharron"